A path through the 130-million-year-old rainforest.

That is usually the truth as the hill resort continues to mesmerise visitors who use the unique funicular railway to go up for a splendid view of the Penang channel and its two bridges, as well as to enjoy the cool air.

But there is a more interesting way to ascend the hill: using the jungle trails which cut through the 130-million-year-old rainforest.

Hiking guru “Raja Bukit” Arunasalam Marimuthu, who likes to be called Raja, took FMT on a one-of-a-kind trail up the hill on the little-known Moniot Heritage Trail.

The 3km trail is 600m above sea level and runs between a forest reserve and private land.

Raja, the chairman of the area’s residents association representing some 400 people, mostly descendants of labourers from the colonial period, said before the funicular train arrived, the trail was part of a 13km bridle path laid out in the 1820s which served as the main route to the hill summit.

It was wide enough for sedan chairs and horse carriages but fell into disuse when the railway line was completed in 1925. 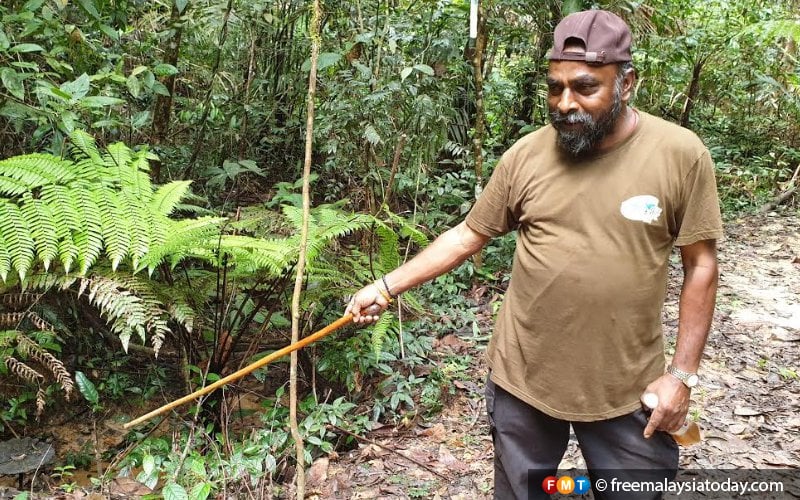 It is named after the man who surveyed the area, Jules M Moniot, who went on to become the first surveyor-general of the Straits Settlements. Granite surveyor markers with the alphabet M, denoting his surname, can still be found along the path.

According to records by the Penang Hill Corporation, the first track up Penang Hill was constructed by Francis Light around 1790, four years after he arrived on Penang’s shores. The Moniot trail was completed by 1825, using convict labourers of Indian descent from British Bencoolen (now Bengkulu, Indonesia).

Raja said the British had wanted a quicker path up the hill than Light’s original, narrow track.

The Moniot route was briefly revived in 1995 but then fell into neglect again. In 2008, Raja said, efforts began to get it cleared of vegetation.

During the 90-minute hike, Raja said the trail was one of the best places to appreciate the unique plants and species growing in the jungle.

“There is a large kancil (mouse deer) population here. But they are very hard to spot. When you do see them, they will collapse and play dead.

“On one trip, we found one. It fell down and we tried to wake it up but failed. It was foaming

at the mouth and we were convinced it was dead.

“But as we were walking away, it came back to life and fled into the bushes,” he said, pointing out the footprints of the deer.

Raja said the most unique plant along the trail is the “Maingaya malayana” or witch hazel, which is classified as vulnerable. Only two of its kind have been found so far, and it is on the Red List by the International Union for Conservation of Nature.

The plant is mostly used for its fragrant oils, he said. 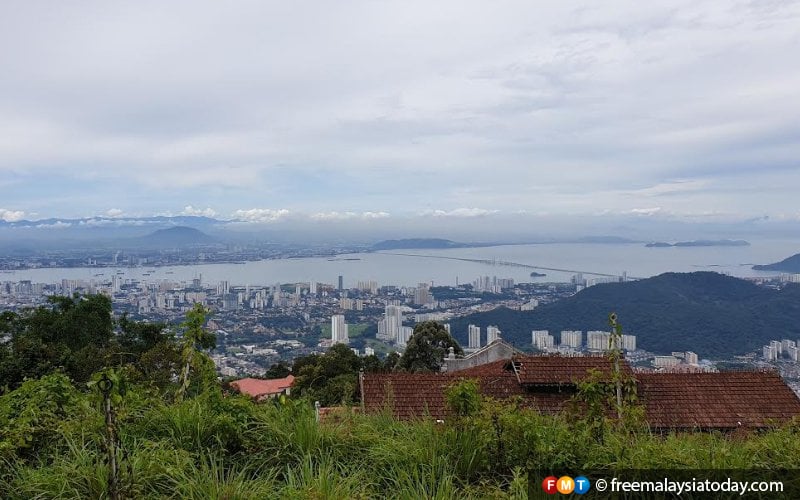 He said these special plants have been planted in a special area and utmost care is being given to preserving them.

Another species unique to the hill is the paper kite butterfly, or “Idea lueconoe”, which feeds on moss on rocks on the many streams downhill.

“The redback ginger leaves are also unique here. These leaves are boiled and taken as medicine.

“But over the years, many of these plants have been going extinct as they are often plucked or carelessly destroyed by people walking past,” he said.

Raja also pointed out several unique plant species along the trail, including rattan wood vines which are used in furniture.

A few large Jelutong trees also line the trail. “The sap was once used in chewing gum and its wood is used to produce quality pencils,” he said.

The end of the trail, beneath a bamboo grove, gives a beautiful view of George Town and the “Mon Sejour” bungalow owned by tycoon Loke Chow Kit. Bukit Mertajam and the Kedah Peak can be seen in good weather.

Penang Hill Corporation, which manages the hill, will be holding its second Penang Hill Festival from July 18 to 21 with dozens of events to celebrate its natural habitat and cultural heritage.

There will be guided historical tours to the Moniot and nine other trails on Penang Hill.

Penang Hill Corporation general manager LL Cheok said while the Moniot trail is open to all, hikers should keep an eye out for rare plant seekers as many of the plant species along the trail are rare and at the risk of extinction.

“We don’t want these seekers to invade and destroy the Moniot trail. We are preserving it for the enjoyment and education of more generations to come.”

Create your own balcony garden

Jazz up a small bathroom with these tweaks